Jack might just livestream today’s poem at 9am, ET,  on his Facebook Page here,  where the video will will be saved for later viewing.  Buuuuuuttttt, he might not. He had lower back surgery yesterday, and though, at this writing, he is doing great, he might decide to sleep in…  Meanwhile, you can find all of his past Livestream videos here.

Black lives always mattered to my father. Here is how he taught us…
(I apologize to those of you who have heard these stories…)

My father was the Captain of a black company in WWII. In boot camp he drank from a different fountain, showered, slept, ate in different tents. One day he noticed that his men’s equipment was not equal to the white companies’ equipment. He confronted the General, and his men were given equal equipment. But still the separate quarters, separate eating spaces. Later, he would wonder aloud to us why he hadn’t noticed these things then. “It’s just the way it was.”

One night, in 1958 (correction, 1957), before civil rights was in our consciousness, my father, now the basketball coach at a small college in western Pennsylvania, started three black players.

The next morning he was called into the president’s office. When Dad came home for lunch, we asked, “What was that about?”

My father said, “The president looked me in the eye and said two words, ‘Next game,’ and then he held up two fingers.”

My mother, sister, and I sat stunned, frightened. We assumed our father’s job was on the line. One obeys the president. We tried to just go ahead and eat our lunch. But after a few swallows, I couldn’t take it, and I stammered, “What’re you gonna do?”

My father finished his sandwich, wiped his fingers, paused, took a breath, and firmly but quietly said, “Next game,” and he held up four fingers.

And that’s what he did. 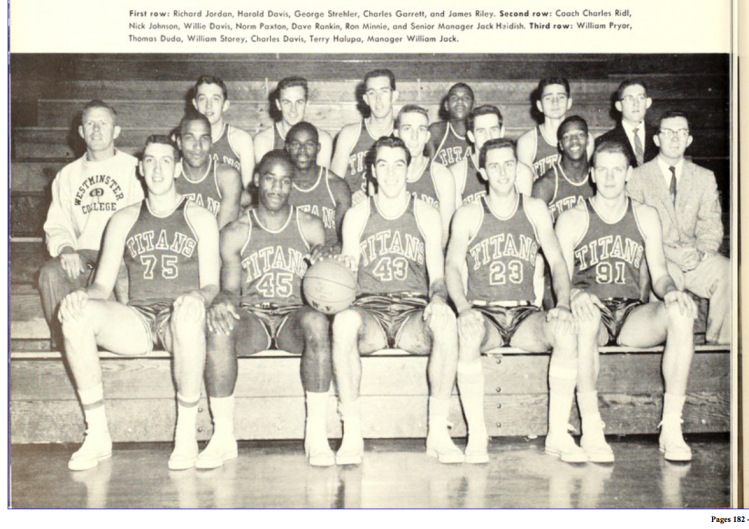 Coach lets those good notes
float, swing their good way
into his late night. He smiles,
and his eyelids lower, and his
young dream comes sauntering
down the aisle of his mind.
He plays the sax.

“Here, Coach, take it,”
and he blows the meanest
wail, so mean that Bix
looks up, drops his chops,
Diz’s cheeks collapse,
and Duke and Lionel both turn
to Miles who laughs and says,
“Man, Count, we’ve all been had.”

Coach is hot. The whole joint
is swinging as he leans down,
blowing his whole damn life out
his horn. Everyone’s clapping,
stomping, shouting, “Yeah!”

Even Bird is flattened, floored,
turns to Mingus, says, “That’s
it. We got a sax.” Coach
can’t believe his ears, hits
a last long, loving note,
letting it hang in the air, feeling
the reed go limp against his tongue.
No one says a word.

On June 21 at 2pm I will give an online reading with Charles Baxter and Laurel Blossom as part of M. L. Liebler’s Living Room Online Literary Series on ZOOM. You can find the zoom link here.  I hope you can join us.

Where are the books? Visit Reader’s World or Hope-Geneva Bookstore in Holland, The Bookman in Grand Haven, the Michigan News Agency in Kalamazoo, and The Book Nook & Java Shop in Montague to find Jack’s books in West Michigan.

Jack on And Then Suddenly podcast by Angela Santillo.

Jack at Fetzer Institute on Kindness.

Jack at Fetzer Institute on Empathy.

Jack Ridl at Fetzer Institute on Suffering and Love.